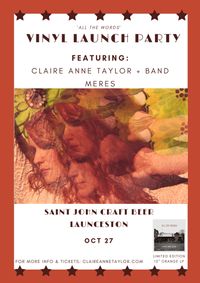 Recorded in a wooden cabin in Tasmania's Huon Valley, by esteemed producer Chris Townend (Portishead, Silverchair, Tim Finn, Ngaiire), Taylor's album is a soulful masterpiece, with Rhythms Magazine going as far as saying 'rarely has such a warm soul been captured on record’.

The vinyl launch party will see Taylor perform with her band and the arvo will also include a performance by Tasmanian artist Meres.