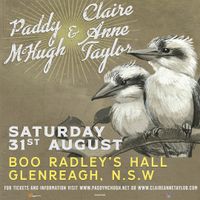 This August and September lauded singer songwriters Claire Anne Taylor & Paddy McHugh team up for the first time to deliver a run of intimate shows in some of their favourite and new haunts, including a special show at Boo Radley's Hall in Glenreagh, NSW.